Every kind of change starts with motion. We are often very good at thinking about how we want things different, but we are not so good at making it work. Taking that first step towards change can be very hard to do. Whether you take a first step to finally start on that essay, to lose weight, to learn something new, to start exercising, to quit your toxic job or relationship, to recover from an addiction, or to start something new, like your own business (or blog 🙂 ). That first step is the hardest one. But it has this great opportunity: it brings you to the next step. And the next, and eventually to the last.

In this article, I tell you why change is so hard and what to do to give it the best chance of success.

Why change makes your brain act like a grumpy old guy

One; the current situation is predictable. The main motivation for everything you do is survival, and our brains like to know what’s going to happen next.

Two; even though the current situation might be bad, it has most likely something that you need. Something that makes you feel good, that gives you a feeling of safety, or something that can help you to cope with difficult things. Brains love this. To make a change, you first have to hand that over to eventually create a better situation. The first step will always be your least skilled one and doing it will first make you feel worse. No wonder it’s procrastination’s best friend!

Besides this, the capacity of the part of our brains that controls your responsible decisions, the prefrontal cortex, is limited. Overloading it (in other words, being a little too enthusiastic with your new plans) will lead to discomfort, it will make us sooper cranky about our good intentions, and it will hand over the job to our basal ganglia, the part that is responsible for our former habits and routines1. Long story short: too much change will drive our brains to return to old habits. Not so handy. 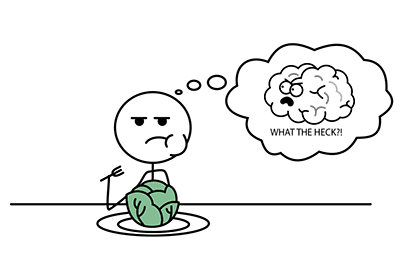 But back to our first step. With these things in mind, change is prone to failure. And thanks to our modern social society, failure is considered wrong. It’s one of the first things we learn at school; a right answer will be rewarded, a wrong answer will get a negative reply of any kind. We all want to succeed at our first try, because we learned that this is the norm3. But is this realistic? No!

Every person that ever succeeded in something took a first step and experienced some kind of failure along the way. J.K. Rowling’s first version of Harry Potter was rejected by all 12 major publishers. Stephen King’s first novel Carrie was rejected 30 times before it was published. Before Microsoft, Bill Gates had a few businesses that failed. Walt Disney once got fired because he “lacked imagination and had no good ideas”. He then created a business that went bankrupt. To name a few. The world would have missed some seriously good shit would these people have stopped trying. Trying is the only way to get to the end of the path. And with trying comes failure. But trust me: it doesn’t stay that way! You will get better at it as you go along and you will find new paths that lead to new things.

By the way, bonus: research has shown that making mistakes makes us more likeable, because it makes you more human. People will literally like you more if you are imperfect2. Isn’t that awesome? 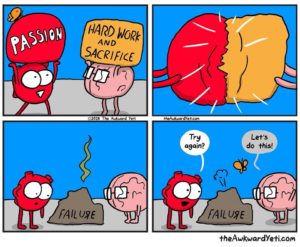 Always keep in mind that these are your steps. A few years ago I was in a therapy group. One day, I told about small victories I had that week, like eating rice, or not skipping a snack. I was very happy about it, but the therapists only focussed on the disordered behavior and they basically told me it wasn’t good enough. For them, these weren’t hard steps and were therefore way too small. But for me it was huge. I wouldn’t be where I am today if I didn’t take those tiny steps back then. Don’t let anyone discourage you; capabilities of others have nothing to do with yours.

How to cooperate with your brain

Don’t make your steps too big – the smaller the change, the more chance of success. Do not overload your prefrontal cortex people!

Repeat new behavior until it becomes a habit – you wouldn’t skip brushing your teeth or walking your dog, because it’s a habit. You do it because you know you have to. Repetition will move the concerning practice to your basal ganglia thingy, and that is what you want4!

Don’t be too hard on yourself – introducing a new routine is hard for everyone. If you are having an off-day, or the feeling that you can’t do it, remember that this is not failing. It’s part of the process and it means you’re doing it right! Allow yourself to make mistakes. Just let them be, there will be a new day tomorrow.

Involve others – you are stronger together. You are much more likely to succeed when others encourage you, or when they join you. Exercising or eating healthy is much easier when you do it with someone else.

Eliminate triggers – you will miss something much more when it is right in front of you, whether it is your ex-boyfriend or a Snickers bar. Just keep them away.

Meditation – stress will not help you at all when you try to accomplish something. When your brain experiences stress, it will temporarily shut down your prefrontal cortex5. We don’t want that! Meditation might have a boring image, but it has all kinds of benefits for your brain2.

Exercise – exercise also benefits all kinds of brain functions, but on another level. For example, it boosts willpower and reasoning2. And let’s not forget that exercise has a good effect on so much more!

The next time you take a first step (or a second or third or tenth first step for the same thing), remember this: you are brave and you are doing something awesome! You are taking care of yourself and your life. Don’t evaluate your first step. Evaluate the fact that you took the step, which is great. And don’t let anyone tell you otherwise, because no one but you knows how much effort it takes. Hang on and don’t give up. It doesn’t have to be perfect and failure is ok. You got this!

Sources:
1: Why we resist change? Blame our brains.
2: 10 Surprising facts about how our brain works
3: Why we all have fair of failure
4: Elation Presents – Why Change is so Hard for your Brain
5: How stress breaks down your mind and body
The awkward yeti
Other drawing by myself