There is this scale. I call it the ‘giving a f*ck scale’. It goes from giving no f*ck at all to giving too much f*ck. Giving too much f*ck is also known as being highly sensitive, a term that is well known to many. To get a better understanding of this subject (and because I actually hate the real term), I like to use my GAF-scale.

We can put every human being somewhere on this scale. On the very left side, we have the people who don’t care much about anything. They don’t care much about others’ opinions, or how others feel. They just don’t feel that much at all (you know, Trump). In the middle, we have what I would call ‘the normals’. They are empathic, have feelings, and care about shit and others, but not too much. This is the largest group.

And then there is the right side, where people worry about that awkward thing they said 2 weeks ago in public. And about their friend who they know has a shit day. And the fact that there are children dying from hunger. And the fact that people are capable of hurting other people. They also cry over pretty music. And the fact that someone just yelled at them. And thousands of other things. If you are on this side, congratulations, you are highly sensitive, or, a Highly Sensitive Person (HSP).

I once read a book about high sensitivity. I don’t remember who wrote it and I only read the beginning, but the writer compared my GAF-scale with a sorting machine. It’s a long time ago but this is how I remember it. Every kind of stimulus is a ball which has to be sorted. The normals receive a stimulus, determine what color and size it has, and put it in de matching basket. Easy right?

But the people on the right have a different kind of sorting machine. They also have a basket for weight, roundness, smell, texture and maybe more. So whenever there is a new ball, every property goes under a magnifier and has to be examined to the full extent. This sorting machine uses a lot more power, and while the ball is just being examined for roundness, the next ball comes rolling in. Omg yes! I found this metaphor very fitting. It gives a good idea of why being wired like this is so exhausting and overwhelming. 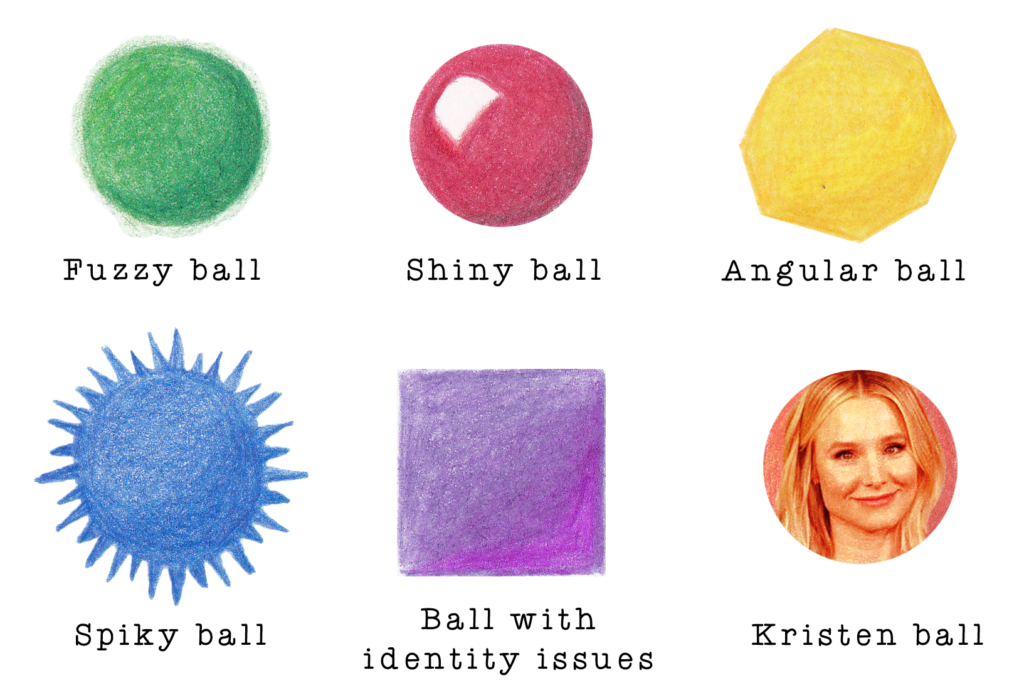 Thedailybeast.com made a nice article about being highly sensitive and how it affects people’s daily lives. “A highly sensitive person is characterized by deep information processing, high emotional reactivity, increased awareness of environmental subtleties and easy overstimulation,” explained Judith Homberg, principal investigator at the Donders Institute for Brain, Cognition and Behaviour in The Netherlands, and a specialist in sensory processing sensitivity.

In other words, being highly sensitive can be very different for every person experiencing it.

Psychologist Elaine Aron, who began studying this phenomenon almost 30 years ago, reports that 15 to 20 percent of the population is highly sensitive to a variety of stimuli—”too many to be a disorder, but not enough to be well understood by the majority of those around you,” she explains on her website. Well that’s interesting. In the first place, great to know that we don’t have a disorder. And YES, that second thing is always a problem. When others don’t experience it like that, they just don’t understand.

(Fun fact: this article also mentions 3 groups of people, the same groups as I mentioned on my scale. Ha!)

How I experience being an HSP

I was 15 when someone mentioned high sensitivity for the first time. I always hated the fact that I felt everything so deeply, and this person told me it had a name. Not that there was anything I could do about it, but it was nice to know that I wasn’t a crazy exaggerator.

It affects me in a lot of ways. The thing that always bothered me the most was that I would cry over (in my eyes) nothing. If someone yells at me, tells me I have done something stupid or wrong, or when I see someone else suffering, I cry. I just feel it so crazy deeply. (Read more about how I experienced this as a child here.)

Then there are all kinds of other things, like sound and light. For my previous job, I edited sound. I could hear everything very precisely and I would edit it until it was literally perfect. I don’t wanna brag, but I was kind of considered the best editor. 🙈 My violin teacher always used to say that my hearing was excellent (I was 6/7 years old at that time). And I played harmonies on the piano when I was very little, because I just knew which keys to press to get ‘happy’ or ‘sad’ harmonies, even though no one ever told me about this.

I’m also very much affected by rhythm. I really like rhythms and I can’t stand it if someone else doesn’t understand it, no offense. A year ago I was in a Bodypump class which I had to quit because my teacher was out of rhythm all the time. I just couldn’t deal with it. And then there is loudness. I can’t deal with loud noises or music. When I was at Aurora’s concert recently (which was incredibly awesome), the applause and sometimes too loud music drove me crazy. I asked for earplugs on forehand and I was very glad I did. The lights also overwhelmed me a lot, but well, I lived.

I can get very strong emotions when I experience certain colors, atmospheres or a person’s mood. Certain colors or color combinations can make me feel really good, or it can be ‘off’. For example, there is a certain yellow color that always makes me nauseous for some weird reason. I can be very uncomfortable when I am in a group of people or when I’m with someone who isn’t in a very good mood. I get happy when others are happy, but I feel awful when someone else is irritated or when there is tension in the air. Can’t deal with that either.. It has happened quite a lot that I asked others about their mood, and then they would deny the fact that they were irritated, but confirm that something was definitely going on.

And then there’s my perfectionism. I think high sensitivity and perfectionism go hand in hand. It really needs to be good, to the point where I suffer from it. Because if it isn’t good enough, it feels even worse.

As you can see, I tried to draw my mind. This is kind of what it feels like. It has a beautiful side and a dark side. The beautiful side is where I can feel extremely happy, or where I enjoy music so much it makes me cry (which isn’t a bad thing). I can be extremely touched by art or by something I haven’t seen before. It’s where I am very much aware of my surroundings and it often feels like I’m in control of the things I can feel and understand. The dark side is where I feel emotions so strong that they make me feel horrible. This can be when someone is mad at me, or when I see or think of suffering. This can be so overwhelming that I sometimes wish that I don’t have to live anymore. This might sound weird or (heyy) exaggerated, but it’s true. I just can’t deal with it and I can’t explain why but this feeling is HORRIBLE. I call it overempathic; it’s empathy but far beyond what is normal. 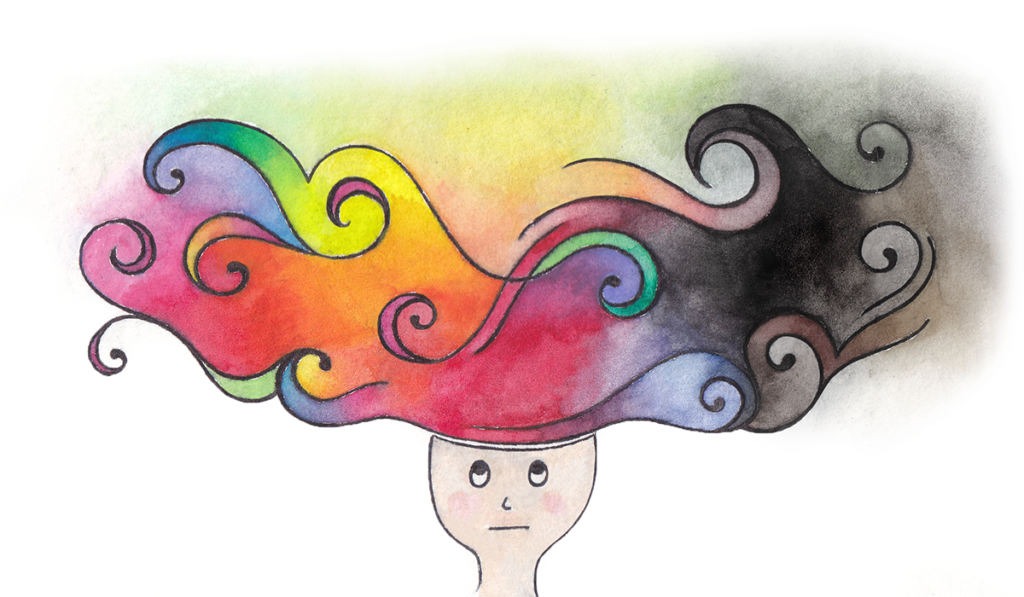 I accidentally made the nice side bigger than the dark side. But maybe it is?

It’s not wrong or right to be on the left or right side. I think you are mostly born with your level of GAF, and you can’t really help the way you are. Of course there can be external factors that are of influence though. But we need all of them! The lefties are often people with high functions, who are good at making important decisions without overthinking every bit. Righties are often artists, like painters, singers, or dancers. They have an eye for detail, and know how to turn emotions into something visual. The reason why van Gogh was such a good painter was also the reason why he was severely depressed. And it’s a good thing that the majority of the world population is somewhere in the middle.

If you are highly sensitive in any way, life can be quite frustrating sometimes. But it really isn’t all bad. I think it’s a great thing to be aware of it though, because this can help you a lot. You are not crazy and you are not an exaggerator. Your senses are stronger and it has been scientifically proven. Find out what bothers you the most, and think of ways to make this easier. And explain it to people if they don’t understand. You got this!

My home! – The story of a sad house

Why failure is a good thing