Ever since I can remember, we had cats. We took homeless cats from Spain, adopted cats from friends and we had a litter occasionally. There hasn’t been a time ever when we had no cats while I was alive. We’ve never had dogs, so I’ve just been raised as a cat person. 🙂 I can’t imagine having no cats in my life.

This post is about my two cats. They are crazy and awesome. Let me tell you all about them.

In 2013, my former foster cat passed away. I got her from the animal shelter years before that and she died at the age of 18 or so. When I got her, she had been in the shelter the longest of all of the cats. I had no idea why, so I took her. Her name was Chippy and we became best friends. Yes, she could scratch every now and then, but she never scratched me because I knew what not to do. After Chippy passed away, it was really quiet in our house. So not very long after, I went to the shelter again.

I asked for the cat that had been there the longest, and that was Mies. Mies is a Dutch name. You pronounce it somewhat like peas but with an M and a shorter ea. Mies had been there for 1,5 years, and even more sad, she had been returned twice. The first time because they said she was cranky, and the second time because her owners had moved and she kept walking back to the old house. When I first met her, she shared a kennel with one other cat. She was known for not liking other cats, and she was not amused. When I entered the kennel to say hi, she immediately stood up and walked towards me. Her foster said that she never did that, so that was nice. I didn’t hesitate and took her with me.

Mies quickly adapted to her new home and she seemed very happy. She could be a bit cranky sometimes, but well, there was nothing wrong with that. At that time, we lived next to my parents in a single-story house with a yard. I also had rabbits, and Mies liked to sleep next to them. We lived there for another year before we moved to an apartment.

This apartment was on the 4th floor, so this was quite the bummer for Mies. She couldn’t go outside anymore, and on the two days in the week where I was at the office for work, she would be alone all day. Cats don’t always mind being alone, but we were thinking about adopting a kitten, hoping that this new cat and Mies would become friends.

Someone at our church had a litter, so yay! We went over to meet our new cat and it was awesome. It was the cutest black baby cat. We were gonna call her Mitsy.

A few weeks after that, she was old enough to be separated from her mom. Mitsy was a tough little girl; she didn’t mew at all in the car, and when we arrived home, she wasn’t scared at all. We put her basket in the middle of the room so Mies could meet her, but Mies was not happy about this situation. She didn’t understand this weird tiny thing at all. But of course this was normal, cats never like each other in the beginning. Mitsy got out of her basket, and walked around like this had been her home forever. We enjoyed her SO much, she was the cutest and the naughtiest and it was awesome.

Cats in an apartment

One day, I tried to walk them outside. They had to walk 8 stairs to do so, but after a few times they walked with me and went outside. They were delighted! Soon they were used to it and walked in and out with neighbors and waited by our front door if we were not home. We really had to be careful with Mitsy because she was about fertile, so we had her sterilized as soon as we could and all was fine. We had one nasty neighbor who complained all the time, so that was annoying, but well. 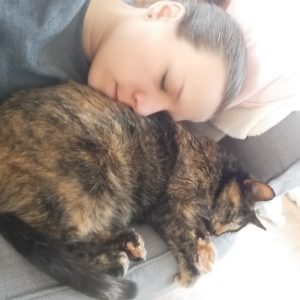 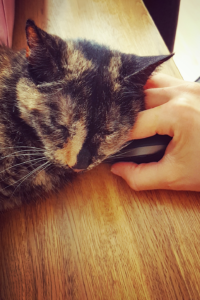 These kind of things, all the time. 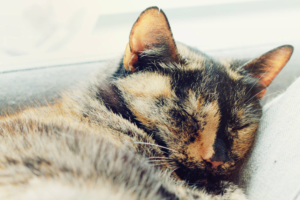 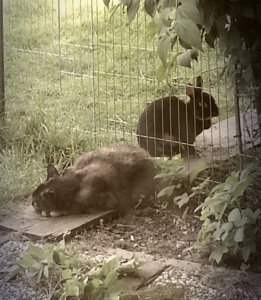 I've seen this quite a lot 🙂 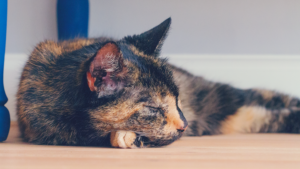 We had lived here since March, but in October, the homeowner told us we had to be gone by February. This was kind of a problem, because there were hardly any rental homes in our city and we didn’t earn enough money to buy a house. But it was 2015 and this year was fricking weird and amazing. As you can also read here, I was admitted in another country for a month and I was in a relational crisis with my husband. Within a few months, my hub got a job and we found an affordable house. We were extremely lucky, because we bought it very cheap just before the housing market went crazy. Read all about my house here.

Worst day of my life

On December the 31st, I wanted to let the cats out in the morning for a little while, because they had to stay indoors for the rest of the day because of New Years’ Eve. But this went differently than I had hoped; there were already kids lighting firework in the morning, and this had scared my cats away. My cats. Were gone. On New Year’s Eve. I went totally crazy. I spent the entire day looking for them, from the morning until 3:00 am. No cats. I finally went to bed because there was nothing else I could do. I knew they would probably be safe, but they must have been so scared.. However, I had left our front door open, and very early in the morning, Mitsy walked in as nothing had happened. I went outside and there was Mies, also calm as ever. This next day was the best day of my life. 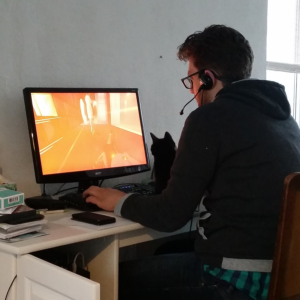 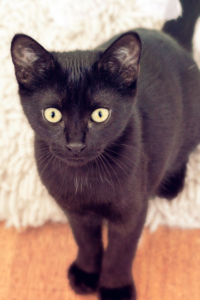 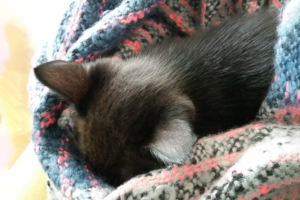 When she just lived with us 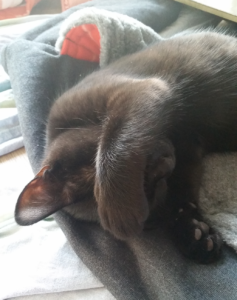 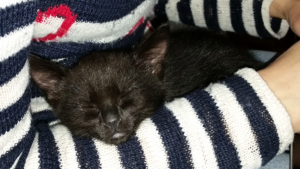 Right before we moved, we found out that Mitsy visited at least 3 houses in our neighborhood on a regular basis to eat shit. Everyone fed her because they thought she was homeless, and we kept wondering why she got so fat. The vet had already noted that she was too heavy when she was sterilized. One of these people had kind of already adopted her and was ready to take her to the vet to see if she had a chip. They had given her a name and she was on their Whatsapp picture. No joke. This family had a little girl and she was devastated to hear that Mitsy already had a home.

In January of 2016, my husband, myself and our two cats had a new home. We installed a cat flap and our little beans couldn’t be happier. They soon claimed our yard as their own and they walked in and out whenever they wanted.

When I changed her chip registration to our new address, the registration company said that Mies wasn’t born in 2004 as the shelter had told us, but in 2001, and her name was Dipsy according to them. I thought she was 12 at that time, and now she was suddenly 15 years old. We will never know, but she is deaf as hell, so I think she is now 17.

The fact that she is deaf has this huge counter effect: she doesn’t hear herself when she mews. She sounds like a fucking old and loud crow. And she does this weird thing: she walks out through the flap at the back, then walks to the front, and screams to every stranger that walks by. She is kind of the village idiot around here. Our neighbors know that she belongs to us, so they often open the door for her and then she screams at out front door until we open it. If it’s our lucky day, she walks straight to the cat flap again to do it all over again. I think she is a bit retarded tbh.

Some time ago, she came through the cat flap at night, making the weirdest noise I’d ever heard. It literally sounded like she was dying. I prepared myself for the worst, just to find out that… she caught a mouse for the first time ever. ^_^


Mies is ‘my’ cat. Mark doesn’t really have a thing for her, and she doesn’t have a thing for him. I have been home quite often in the past year, and she follows me through the house wherever I go. It’s the cutest thing! She hardly ever sits on my lap, but she often bashes me with her head if she wants to cuddle. She also likes to lick wires. I love her to bits and pieces. She can be so happy when I’m around, it’s adorable. Except for when she is hungry. Crow alert for sure, not kidding.

Mitsy is a tomboy who always comes home with wounds, blood, a tear in her ear, and ticks. And she doesn’t really care. She is a monster when it comes to birds and mice. I hate her for that, really. Sometimes she catches one or more birds every day, for a week. We would wake up to find our bathroom covered in feathers, as if a pillow had exploded. Or she comes home with mice for days in a row.

Mitsy is Marks cat. I love her and she loves me, until Mark comes home. She loves to sit on his back and she sits on his lap when we watch tv. Except for when she sleeps on our bed at night, then I am the lucky one. She always sleeps on my back or butt or legs and I can’t really sleep when she’s there. But well, it’s cute, and she the queen, so.

She likes to stand on my foot with one paw. She often does this when I prepare her food. Or she puts one leg on my leg when I lie on the couch. When we take a shower in the morning, she sits on the mat right in front of the shower, waiting for us to come out. It’s adorbs!

I love how they both have their characteristic voice and they both love different kinds of food. Mitsy doesn’t touch Mies’ food and vice versa. They both have their unique personality and I can recognize both of them from a huge distance. I wouldn’t change them for the world.

About six months ago, I adopted another cat from the shelter. She was called Rosalinde. She was the worst case available. The kind of cat that would hiss to you from a 10 meter distance. I took her home, and made a bunker for her under our bed. She stayed there for a month, but wasn’t coming out ever, so we moved her upstairs. This was a lot better. She had her own room and showed her face every now and then. But after about a week, we hadn’t closed her door tight enough before we went to bed. And it wasn’t that important, because she would never come out. But the next morning… she was gone.. 🙁 She had left the room, walked down the stairs and left the house via the cat flap. We were stunned. How?! I’ve been searching for her for days, but of course she didn’t come back. She has a chip, so if she will be caught again, we will get her back. I really hope that will be soon.

My home! – The story of a sad house