For years, I’ve had the Irritable Bowel Syndrome. You might have heard of that before. Although you would think it’s a disease like any other, it’s not. It isn’t a disease, it means: something is (really) wrong with your bowels and nobody has a clue what to do about it. And the number one thing you will hear is: you’ll just have to live with it. Go home and live your life.

Another awesome thing is that there are dozens of people who will know what to do about it, because it worked for them, and they are certain that it will work for you. And if it didn’t, you probably didn’t do it right. I now know that there can be 39298538 reasons for sucky bowels. Something that will work for someone else can have a totally different effect on you. In the 5 years that I had the worst tummy ever, I’ve tried countless things. And the thing that eventually made it better wasn’t one of these things.

Please read this if you have been diagnosed with IBS as well. Who knows how much it can help you.

Let me tell you about my bowel adventure. 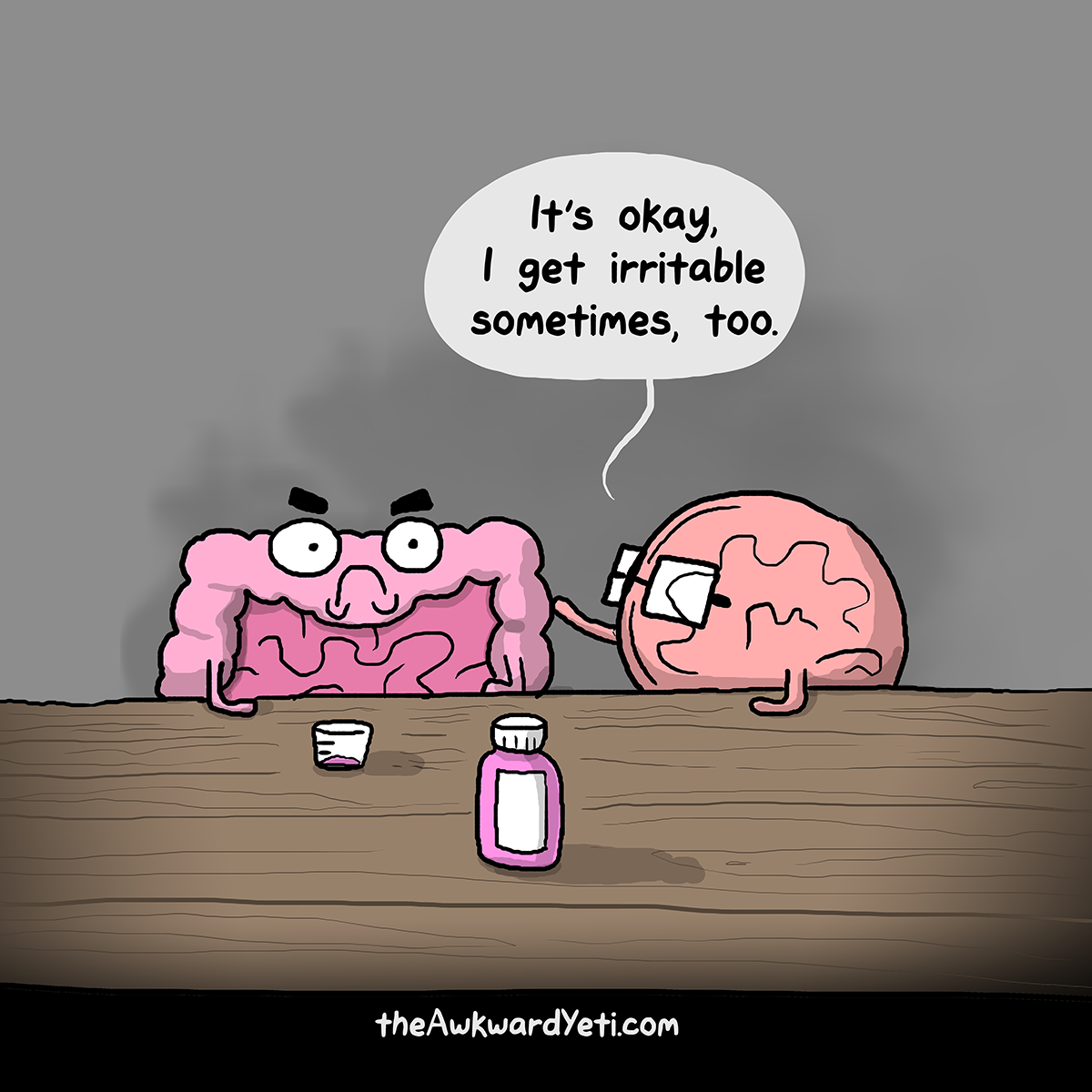 My eating habits really got worse in 2013. I felt like shit but I got a nice flat tummy. I ate very little and never got bloated. After a while, I found out that I had a serious problem and that this wasn’t sustainable, so I slowly tried to increase my daily calories. And that’s where things went wrong. For some reason, I got really bloated when I started to eat more. But REALLY bloated, like I was 6 months pregnant. And of course, getting a huge tummy was a total nightmare for me!

I don’t know if I somehow made a connection between food (which I hated), being bloated and feeling awful, but ever since this happened, the same pattern appeared every time I relapsed. My tummy would be flat if I ate close to nothing, and it would explode if I started to increase my food.

Being bloated had 2 consequences. On one hand, it made me 3 times as big (but really), not only to the front but also to the sides. On the other hand, it hurt SO much. Not because of cramps (I didn’t have those), but because it had to expand beyond what was possible, or so it felt. 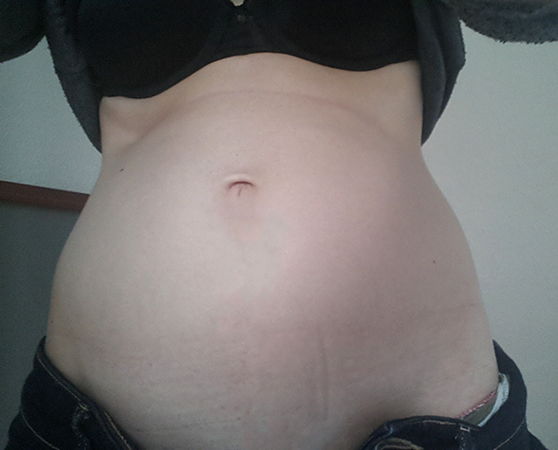 I started my first group therapy in 2014. It was only 2 days a week, but I had to eat 4 times as much there as I would eat at home. And it made me terribly hungry, so I would now also eat more on the other days. On top of that, it was very intense and it was all about food of course. My tummy got even WORSE than before. It was awful and terrible and I’m not sure if it also made me gain weight, but I gained weight SO fast. If I googled it, I would find theories that confirmed this, so I now thought that being bloated made me gain even faster. And there was nothing I could do to stop it.

As expected, this went on until I relapsed again in 2015. I would go to a clinic abroad later that year. My tummy issues got better as my eating got worse, and I knew this would all change as soon as I would enter the clinic. And it did. I brought pants in 4 sizes because I had no idea how much I would gain in this month, and not being able to put on pants would be kind of a problem. 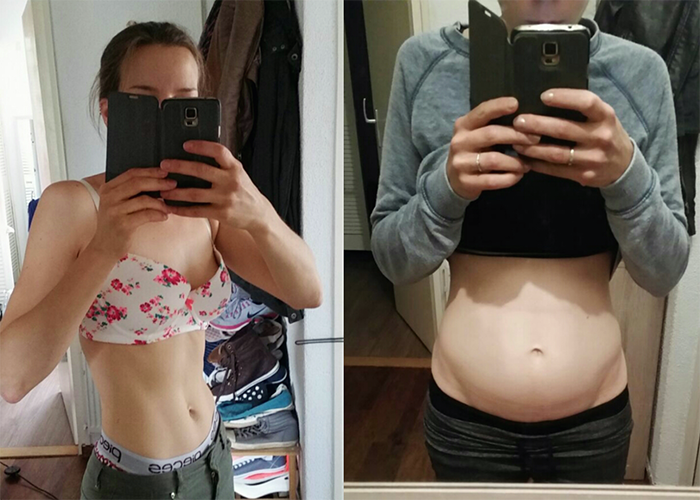 I don’t like to post this picture because I still feel like I wasn’t thin enough on the left side, by far. But anyway. The difference between these pictures is 4 weeks; before the committal and after. The difference is also only 1 kilo. (Omg those boobs. They were so tiny and that was SO nice! They are now frickin’ huge again, meh. 🙄) Only 1K. You probably wouldn’t even notice that without the bloat. And this bloat was just a tiny bloat.

After this therapy abroad, I had gained only 1K (which surprised me), but I was bloated AF. I had expected this and it sucked as much as I thought it would. And so my journey to fix it for good began. At first, I believed my doctor, who said it would get back to normal as soon as I would eat healthy again. After 6 months of eating quite healthy, I gave up. NOTHING had changed.

I had my last ballet recital in 2016 and hardly ate anything that week so I would be able to fit in my costumes. Luckily, I made one of the costumes myself, which I adapted to my bloated body. At this point I had already gained some K’s, so doing a recital with a heavier body was hard enough.

It became so bad that I couldn’t sit or sleep anymore. I had to wear pregnancy pants because that was the only thing that would fit. Working at the office was a total nightmare because I had to sit for 10 hours in a row. I didn’t want to live anymore. It was a neverending nightmare and it never stopped. I thought it was never going to change and I secretly hoped I would have cancer or just die. 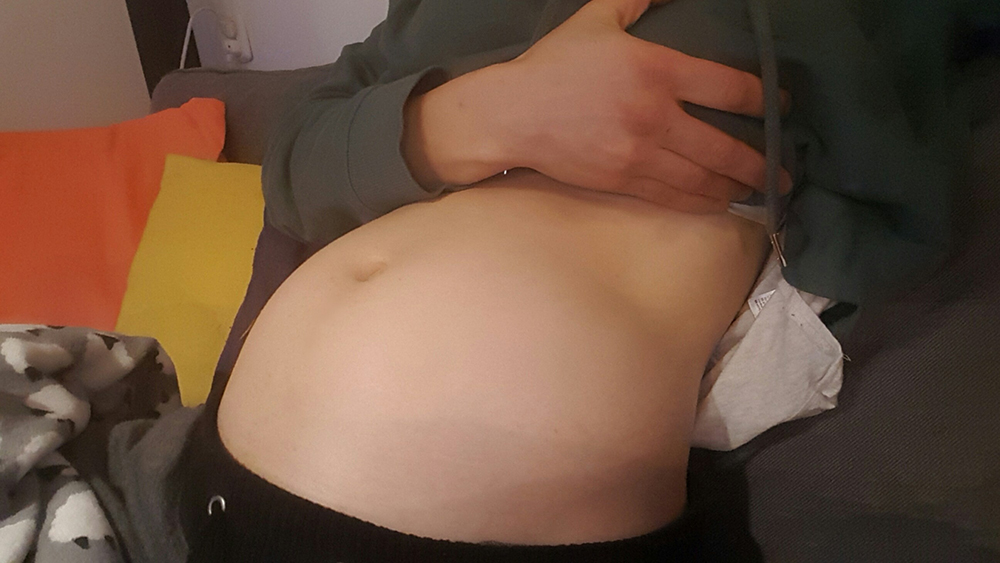 One of the hardest things was that other people said they didn’t see it. “It’s not that bad!” Or “My tummy looks like that as well if I stick it out!” Or “I look like that as well after a meal!” Or “We all feel bad sometimes.” Some people obviously reacted like I was exaggerating.

At some point, I couldn’t take it anymore. Working became impossible, and at the office I would cry all the time. I would hide in the recording studio so I could just cry. So I talked to my managers to tell them I had to take a break. “How is that going to make it better??” they said. I would have a vacation soon after. We decided to see if this would change anything. This was a 2-week vacation to France and Italy, but still nothing changed. Now my boss said: “See, nothing changed! Working less isn’t going to make any difference!” But, I had been going on for far too long and I was far beyond burned out. I demanded less working hours because I just couldn’t work like this anymore. I was sent to an occupational health doctor and he advised me to decrease to 50%. That day I stopped working at 13:00 and slept de rest of the day. For weeks, I would sleep all afternoon.

I think I did this for 2,5 months. And after about 1,5 months… Things got better!! And I had no idea why. I did know that it probably didn’t have anything to do with what I ate. I posted the following picture on Instagram: 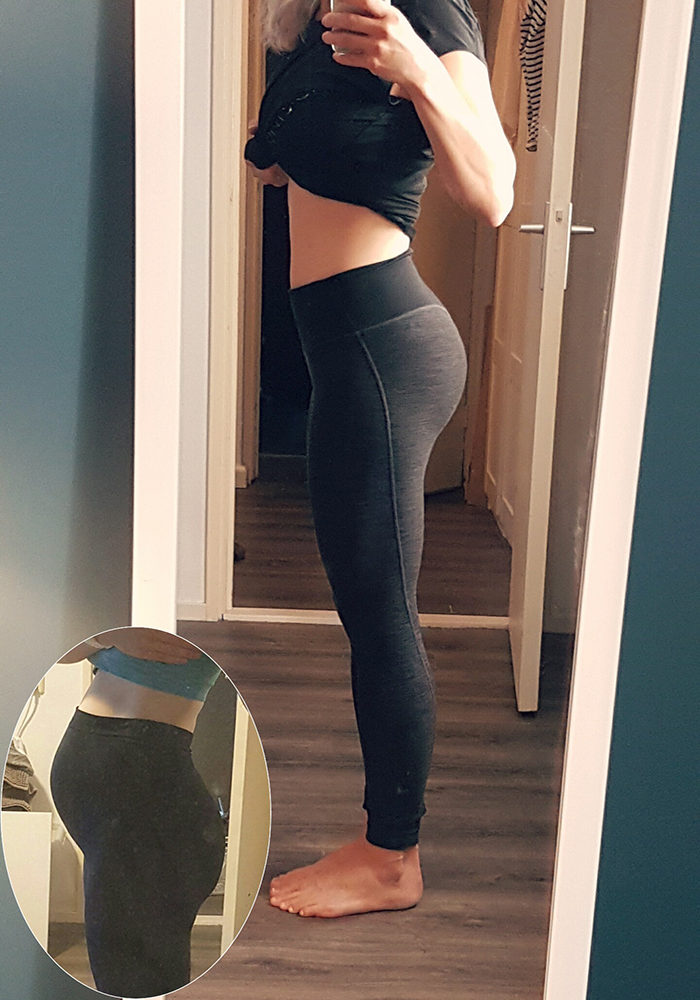 I started working 100% again at the beginning of December. At the end of December, it was as bad as it had been before. However, I knew I would leave this job soon, so I just sat it out. In the next year, 2018, I started my traineeship, stayed at home for 4 months when they couldn’t find me a job, and started working when they did. It was quite bad during the training that took 7 weeks, and it slowly got better when I was at home for 4 months. Right before I started this new job, it was so good that I had bought new clothes for my new ‘unbloated’ life. It looked so nice! After 2 days of work at my new job, it was a complete DISASTER. It was the worst. Now there were only 2 possible causes left: stress and sitting all day. I eventually quit this job, because the traineeship was just misery.

Now I was at home again, starting this blog. It didn’t take long before it got better again. And then I started working as a teacher. I was terrified it would be all bad again, but it did not! Well, sometimes it did. But on average, it’s quite alright. I think that the bloating I’m experiencing now is caused by my bad eating habits around the holidays, and maybe because I drink Bolero lemonade at the moment, which is sugar-free. It can suddenly go wrong again though, like a few days ago. I had to leave a GOT-gathering at friends because I couldn’t sit anymore. No idea what had happened, but it was at it’s worst. If it is this bad, I am reminded of how good it is now on average. My life got SO much better!!

So what caused this “IBS”? My doctor had told me countless times that it could be caused by stress. I didn’t believe her, because it was that bad; it had to have a physical cause. But I think she was right in some way.

➡️ I think stress over food played a big role. I think my fear for food and gaining weight had been so strong, that stress over food combined with other stress factors caused my bowels to do that. And I think it’s caused by the kind of stress you get from being in a place where you feel you don’t belong.

➡️ Menstruation makes it worse, that I know for sure.

➡️ Maybe it had also to do with damaged insides, I don’t know. Maybe it needed time, but the fact that my latest programming job made it so bad in just 2 days makes me think this isn’t true.

➡️ Purging? Don’t know either. Maybe it makes it worse but I can’t tell you for sure.

➡️ And last but not least: I think sitting all day played a huge part. When it was at it’s worst, I had jobs where I had to sit all day. I now have a job where I hardly ever sit, and it’s nothing like it was before.

Do you have the same issues? Write me!