I’m waiting to do my thing. I will be up in the next two minutes. My legs are trembling, my mouth is super dry and my heart is pounding like crazy. And then it’s there. The moment that I can’t escape. My fear is overwhelming. It feels like I’m standing on the edge of a cliff, chased by a bear; I can’t go back but going forward means death. My heart is now like a wrecking ball inside my chest. It feels like I am going to die at this very moment.

This was once me trying to speak in public. For a long time I wondered why I had these stupid issues that ruined my entire life. They didn’t make any sense, yet I could not change it. I could get a panic attack from something on TV, which of course is not realistic at all, nothing on TV can harm me.

Behind all of this is our brain. It’s one amazing organ that will do everything to keep us safe. It wants to make sure nothing bad happens to us, so it does what it thinks is right. But there is one thing brains suck at. They are kind of like computers; they can process limitless things, but only in one way. Make one typo in your code and EVERYTHING IS ERROR. I’ll explain this in a minute.

🧠 But first let me tell you how amazing our brains are and why they do what they do. 🧠

The purpose of our brain

Our brain is made to do this very one thing: make sure we stay alive. It’s destined to do this from the moment it begins to develop before we are even born. It does this in lots of ways.

Isn’t this all frickin’ amazing? Our brain has a very complicated 24/7 job and it keeps on doing this until we die. 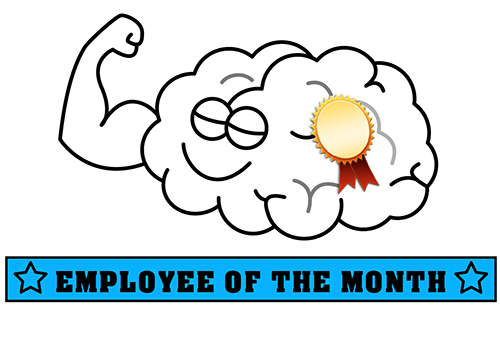 Fear of dying from physical things

It is very important that certain things frighten us. Without fear, we would be dead in no time. Have you ever seen the videos of cats vs cucumbers? Isn’t it amazing that cats have a natural fear of something that looks like a snake, even though they have probably never seen a snake in their entire life?

So what are we humans naturally afraid of? According to multiple sources, we are born with only two fears: hights (falling) and loud noises1, which are in turn caused by a fear of dying, mutilation and extinction2. After that I came across a study that showed that 6-month-olds are also naturally afraid of spiders and snakes3. Anyway. We only have a few natural fears when we are born. All of the other things we are afraid of, like the dark, or water, are things we learned to fear.

That one flaw I was talking about

Back to the purpose of our brain. It wants us not to die. So when our brain thinks we are about to die, the concerning situation will be labeled as ‘deadly’. If that concerned you nearly drowning, your brains will, for the sake of your survival, label open water as a lethal thing. Congratulations, you now have a trauma. Your brain doesn’t evaluate the situation itself. It doesn’t care about the real cause of you nearly drowning, it just blames water. It can even label the sounds and smells that you perceived at that moment as dangerous. I once saw a girl on TV who was terrified of mannequins, which had tormented her since seeing Chucky at a young age. She couldn’t even walk past a shopping window if there were mannequins behind it. There is one thing your brain sucks at; determining whether a danger is real. But it’s ok brain, no one is perfect.

Fear of dying from mental things

According to one of the websites I mentioned earlier, we are also afraid of separation (abandonment, rejection) and ego-death (humiliation, shame, not being worthy or loved), also traceable back to fear of dying2. So apparently there are things we fear on another level. It’s not like the startlement you experience when you hear a loud noise, but somehow our brain knows that these things are bad for us. I remember learning about a horrible experiment when I was in high school.

US experiment on infants withholding affection

In the United States, 1944, an experiment was conducted on 40 newborn infants to determine whether individuals could thrive alone on basic physiological needs without affection. Twenty newborn infants were housed in a special facility where they had caregivers who would go in to feed them, bathe them and change their diapers, but they would do nothing else. The caregivers had been instructed not to look at or touch the babies more than what was necessary, never communicating with them. All their physical needs were attended to scrupulously and the environment was kept sterile, none of the babies becoming ill.

The experiment was halted after four months, by which time, at least half of the babies had died at that point. At least two more died even after being rescued and brought into a more natural familial environment. There was no physiological cause for the babies’ deaths; they were all physically very healthy. Before each baby died, there was a period where they would stop verbalizing and trying to engage with their caregivers, generally stop moving, nor cry or even change expression; death would follow shortly. The babies who had “given up” before being rescued, died in the same manner, even though they had been removed from the experimental conditions4.

I wonder what nitwit would cooperate with such an awful experiment. However, it teaches us a lot about human affection. Without it, we die. Without worth or human contact, or when we are being rejected, we don’t get affection. And this is why shame, humiliation and rejection feel so awful. And when you are more emotionally sensitive than the average person (post about that here), your brain will be quite busy labeling things as dangerous. Like a social event, or a presentation.

What to do with our anxiety

I am and have been afraid of many things. I am afraid of anger, failure, rejection and not being good enough to exist. When I was about 15 I developed speech anxiety, which has been a total disaster until I graduated university. Speaking in public is still not something I like to do, but it doesn’t control my life anymore. And then I became afraid of food and getting fat. All of these things would never kill me, not in this era. They are all unreasonable and yet they still control my life. The funny thing is that I don’t have any ‘normal’ fears like spiders or being outside on my own when it’s late and dark. (And these are real threats that could get me killed. Isn’t that weird?)

So what if your fears control your life, or even worse, can get you killed? The bad news is: fears are very hard to get rid of, I’m not gonna lie (but keep on reading). One study with monkeys showed that prolonged stress affects our brains in the long-term5. Another study with rats showed that prolonged stress makes your hippocampus shrink, which hinders our brains from forming memories and learning5. Maybe that is why I remember so little from when I was younger? So your brain is like a hard drive, but more like the cd’s you could only burn once. Once it’s on there, it’s on there (but read the next paragraph). A little test: remember what you had for dinner yesterday. Now try to forget what you had for dinner yesterday. You just can’t. It’s one of the first things I learned at Educational Sciences.

But you have to make it work. This is the only brain you got. You can’t go to God and be like: 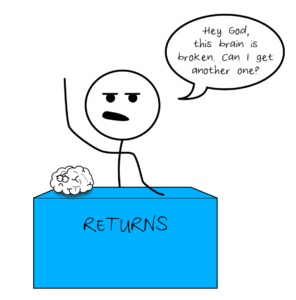 Just nay. And that’s a really good thing! Imagine if we could return everything we don’t like about ourselves. Now that would make God reaalllyyy busy!

The good news (a.k.a. how to make it better)

Yes, there is good news! The extent to which we can invalidate a fear totally depends on the situation that caused it. There are fears that you can overcome quite easily, like the fear of spiders. But a trauma or prolonged exposure to stress can seem almost impossible to fix. However, even if you can’t fix it, you can make it better.

And then there is this: a fear is a real thing and you should take it seriously. You can’t expect a fear to disappear by neglecting your feelings. You might want to adapt your life instead of trying to change yourself. If you have anxiety, that’s a real shit show, but others will have to deal with it. 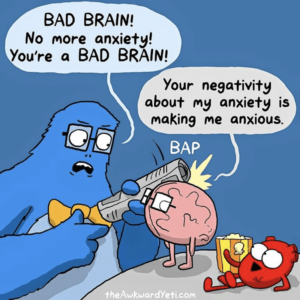 It can get better, but you need to embrace it

A few years ago I got a bad case of social anxiety. It was particularly bad when I had to go to friends or birthdays. At the time, my hub didn’t know what the f*ck was going on, so he thought it would be best to drag me along anyway. That didn’t help AT ALL. I would get panic attacks whenever we got in the car or rang the doorbell. So at some point, I decided to do what felt right. Now, years later, everyone knows I will not always be there. My hub has accepted it and respects it. I usually keep my decision open; I can always go or stay at home. When the pressure is low, it’s much easier. One of the things that helped me most is accepting that this is the situation.

I hope this post will give you a bit of hope. There is no need to be ashamed of your fears and people will generally accept and understand much more than you would think if you just explain it. I can now tell you that my life has totally changed since I started dealing with my anxiety. There is no magical trick, but I think accepting yourself for who you are is the fundamental start.

Sources:
Image: The Awkward Yeti
Other mages by me.
1: What is the science behind fear?
2: The (Only) 5 Fears We All Share
3: Are We Born Fearing Spiders and Snakes?
4: US Experiment on infants withholding affection
5: 10 Surprising Facts About How Our Brains Work
6: How Stress Can Change the Size of Our Brains and What We Can Do to Lower It